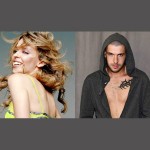 Australian superstar Kylie Minogue and the 2005 winner of X Factor Shayne Ward are to set perform on the X factor TV Show this Sunday, Kylie is going to be singing Better than Today which is the third track from her 2010 album Aphrodite.

Shayne will be performing a new track Gotta Be Somebody from upcoming album Obsession.
Shayne was mentored by Simon Cowell in the 2005 competition and is still signed with Simon’s record label. This performance will provide a chance for Shayne to make a comeback into the pop charts with his new album which is imminent.

The X Factor will have the pleasure of both Minogue sisters with Dannii as a judge for this year’s competition. Kylie has been on the X Factor show in the past, she joined her sister last year in the judge’s house part of the show. Kylie has been tweeting Danni regarding the upcoming show, and seems very excited.

Kylie’s latest album Aphrodite was released in July 2010; it is regarded to be in the poppy-dance genre. Kylie has just finished on the video shoot for a track with Taio Cruz named Higher.

The current favourite to win the 2010 X Factor is Matt Cardle with odds around 13/5 Second are One Direction with odds around 3/1 at the moment. Third is Rebecca Ferguson at 7/2 she is my personal favourite, Cher Lloyd is fourth at 13/2. Who do you think will win?