St James park is our game for the night, which is the only one to be shown on TV. However for those who cannot see the 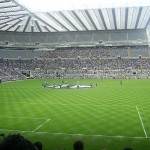 game, you can get all the updates on Newcastle United Vs Arsenal right here. It has been mentioned today that Arsenal will field a more full strength side today than they do in the past in this competition.

Newcastle however are in fine form for a team that has just been promoted. They have secured wins against Aston Villa and everton aswell as giving Manchester City a fine run for their millions and looking really up for the fight of staying up. Newcastle fans will look to the Arsenal game in order to show people that they have a good team to stay in the premier league.

Both of these sides are in the hunt for major silver with arsenal desprate for something with all of the other so called big 4 grabbing trophies on a more regular basis.