Our last match of the night sees bottom of the premier league, West Ham United, take on rough and tough stoke city. I 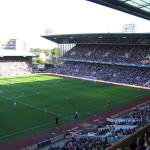 might get slaughtered now for calling stoke city a rough and tough side but they certainly are a fighting team. Stoke have been scoring goals lately though with wins against local rivals Aston Villa and some goals against Manchester United the weekend. Stoke don’t really travel well however, but they have scored the most goals in the second half and recorded the most points once they go behind in the league.

West Ham looked to be on a revival until Newcastle halted that the weekend. The carling cup won’t come as a great distraction to West Ham as they will be looking to strengthen their league position and climb above the likes of liverpool and wolves out of the relegation. I expect stoke to win but goals will come in the second half, if you fancy a flutter click the betfair adds on the home page to recieve a free £25 bet.