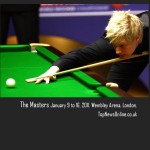 Wembley arena is the place to be on 9th January when the year’s most famous tournament begins and the Live Snooker starts.
With Mark Selby hoping to win a third time in four seasons, he beat Stephen Lee in 2008, Ronnie O’Sullivan beat him in 2009 but Selby got the better of him this year to win the 2010 title.

At one stage he was 9-6 down but came back with a fantastic and thrilling win of 10-9
The atmosphere at Wembley seems to bring out the best in Mark Selby; he loves playing in this event and has a great record in the Masters since his debut in 2008.

Mark Selby is hoping to meet Ronnie O’Sullivan again in the final of this prestigious invitation tournament, as the atmosphere in the last two finals between them was nail biting, so if they do meet again it should be edge of your seat viewing.
Make sure you watch Live Snooker.