England Retain the Ashes the first time in 24 years 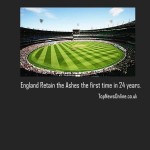 England are now 2-1 up with only the Sydney Test to come. If they are not beaten, they will win their first series in Australia since 1986-87.
David Cameron; the English Prime Minister has congratulated the team on what he said was “a brilliant performance”

With Australians looking at a home defeat; there has been very poor spectator numbers, many empty seats around the stadium.

Mike Gatting; the last England Captain to win the Ashes in Australia has been saying how it’s not just one player who will win the Ashes, it’s the team collectively, and they are battling against a team which has been very successful playing at home.

The Australian Captain has been talking about being disappointed with the way in which the series has gone for them.
He also said they need to pay credit to the England team and the way they have been playing thought out the series.