It has been brought into question, the possibility of time travel after a series of archive videos and photos seem to be 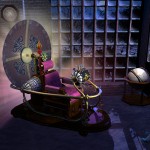 showing a little bit of proof that time travelling has actually occured.

How does someone prove that you have time travelled? Well basically, it has emmerged that some archive footage from Chaplin appears to show someone walking past the camera on a mobile telephone! Yes it is shocking I know and the first thing I thought is, time travelling hoax!

I want to know your opinion of the so called time traveller, do you believe time travelling has happened or is this just a huge ellaborate hoax that, so far, has fooled most of the world? Let me know your time travelling thoughts using the comments.