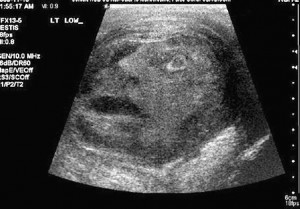 September 2009 a 45 year old male had an ultrasound scan after being admitted to hospital with survere pain in his testicle. The results shocked the two doctors so much they submitted it to the Journal Urology and if was featured in that months issue.

Dr Greg Roberts and Dr Naji Touma were treating the man for a testicular tumor and the vision they had from the scan looked like a mans face in terrible pain like the owner!

We have all thought we have seen faces in objects from time to time like the man in the moon or the image of jesus on a piece of toast, the picture in the scan looked like a mans face with his mouth open and one eye looking back at you as if he was screaming, the thought did cross the doctors and staffs minds that it could be a sign from the deity ‘Min’ the Egyptian God of male virility but decieded it was mere coincidence instead.

After a thourough examination the doctors found the mans tumour to be benign, they asked him if he wanted to look at the scan as it was so unusual but when he found out he was clear of cancer he didn’t seem very interested.

Testicular cancer is often called a young man’s illness and can occur in men between the ages 15 to 55 years old, after blood test and scans the only way to really know for sure if it is cancer or not is to remove the testical completely.

After the picture of the face was published the Chronicle of Higher Education wich is based in Washington D.C. picked up on it and it went viral.