Donatella Versace’s Collection for H&M Sold Out in Under 30... Customers spent the night on the pavement outside the H&M stores across the world waiting for the opening at 9am, there were scenes of hysteria as people rushed in. In the UK customers were give wrist bands and PR-allotted 10 min time slots, they were limited to purchasing only 1 item in each size per customer.
This was done to try and avoid what had happened in Dubai and Beijing were invite only VIP preview customers cleared the shelves of most of the collection leaving hardly anything left for regular customers, most of what had been snapped up in the first 30 mins was put straight onto e-bay at highly inflated prices.

Donatella Versace arrived in her chauffeur-driven car outside London’s Regent Street store to celebrate the launch of her collection for H&M. She stepped out onto a pink carpet and was wearing a £199 pink leather studded dress and black leather jacket both from the collection.

Extra security guards had to be drafted in to control the queues and in some stores blew whistles to let shoppers know there time slot was up, all the sales assistance were dressed in Versace clothes .

A lot of male shoppers were disappointed when they found most of the previewed men’s wear in the collection could not be found in the stores.

H&M’s web site crashed when hundreds went on line at the same time trying to grab a piece of Versace, a spokesman for the store had to take to twitter to apologise for the ‘technical problems’ and they were working hard to resolve them.

The collection which included very sophisticated men’s wear and many colourful dresses and prints for the ladies. The range starts at £19.99 for jewellery up to £199.99 for a leather jacket.

The collection was launched in a glittering fashion show in New York last week and saw Lady Gaga and Prince to name but a few all were wearing Versace outfits. 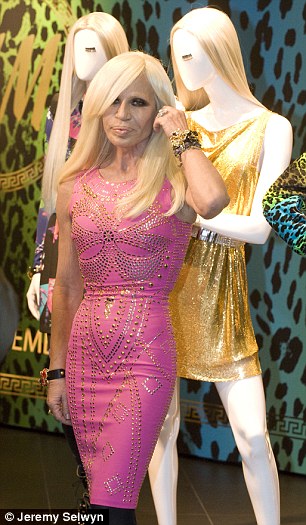