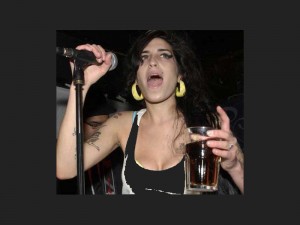 Amy Winehouse, aged 27, had a long struggling with alcohol and drug abuse. She was found dead in her Camden house, the cause has not yet been released. The Superintendent at the scene said it would be inappropriate to speculate.

Recently she had cancelled her European tour after being too drunk to perform. The crowd at the Serbian gig were booing as she mumbled and staggered around the stage.

Apparently all the TV’s in her local pub were switched off as the news of her death was breaking. They did not want the night turning into a wake.

Her first major acclaim was for her debut album ‘Frank’ it was nominated for the Mercury prize. Her worldwide fame came with the release of her 2006 album ‘Back to Black’ which won five Grammy’s.

There has already been tributes from celebrities including Rolling Stone Ronnie Wood on his radio show. And Kelly Osbourne tweeting
‘i cant even breath right my now im crying so hard i just lost 1 of my best friends. i love you forever Amy & will never forget the real you!’