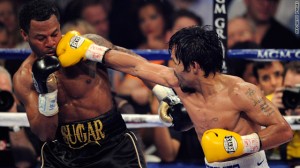 Manny Pacquiao retained his WBO belt in a points decision over Shane Mosley.
Pacquiao was the overwhelming pre fight favourite. Pacquiao knocked Mosley down in the third round and came close to being the first man to stop Mosley.
Mosley managed to hang in there but the Filipino managed a
119-108, 120-108, 120-107 verdict in Las Vagas.

Pre fight Mosley promised an awesome battle of two titans; however after the initial flurry, Mosley was in retreat for the remainder of the fight.

The Mosley Pacquiao fight was held in the MGM Grand Hotel in Las Vegas with a crowd of around 16,000.