Many parts of the UK are under threat of more snow over the coming days, which brings with it misery for Christmas travellers. Drivers on the M6 got stuck in their cars for the best part of the night due to disruption at airports, railways and the roads. 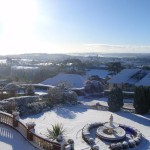 British Airways has cancelled all flights out of Heathrow from 10am until 5pm and all short-haul flights out of Gatwick from 10am until 4pm GMT.
BA has advised all passengers due to fly with them between theses times not to travel to Heathrow and there will be severe disruption at all London airports, Easyjet have cancelled flights between 6am and 10am GMT leaving Gatwick as European airports have been affected just as badly
Police are warning the public if they do decide to risk travelling make sure the take extra precautions
Northern Ireland which was hit badly on Friday now has to contend with frozen ice and snow and Christmas shoppers should really think carefully before setting out in the car.
THE University Hospital Wales in Cardiff has asked staff if they could help out over the weekend as the weather conditions were affecting the staffing levels.
Other stories caused by the bad weather include: An urgent appeal for blood donors due to socks running low especially O negative, companies are warning of delays in deliveries reaching customers before Christmas, lots of sports fixtures have been abandoned .
One good thing about the snow it has caught out the bad guys a cannabis factory in Leicester has been caught out because the heat lamps melted all the snow on the roof.