The Red Notice has been issued because Assange is wanted for questioning regarding a sex crime in Sweden. 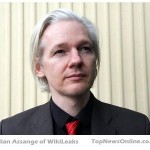 It’s alleged the founder of Wikileaks raped a woman and sexually harassed a second woman in August 2010. Assange denies all accusations, supporters claim he is a victim of a smear campaign.

People have been asked to contact the police with any information on his current location. He has spent time in England and Sweden and regularly moves from country to country.

The Red Notice is not an actual arrest warrant itself however it facilitates the circulation of current information between countries which will aid in finding and extraditing Assange.

Assange, 39, born in Australia, he was convicted in the early 90’s for computer hacking and given a fine. He went on to co-write a high profile hacking book named Underground: Tales of Hacking.

Last Sunday Wikileaks started publishing 250,000 US diplomatic cables. This is the third major release of US Classified documents.

If found; Mr Assange could face extradition to the US, however it’s expected many nations may refuse as the US espionage act carries the maximum sentence of the death penalty.