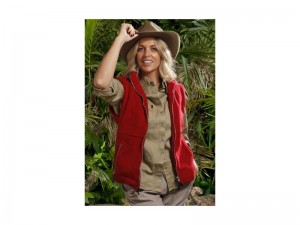 After a night in solitary confinement; well sort of, Sheryl Gascoigne has become the first celebrity to be voted out of the jungle.

As her name was announced she actually looked pleased to be leaving.

Sheryl has spent the last couple of days in jungle jail, she was initially sent there with Lembit Opik. They were joined by two contestants after each kangaroo court.

Sheryl Gascoigne’s last night was spent in a single cell along with five other contestants; each in a separate cell.

They were faced with a challenge to win immunity from the vote off. This involved lots of keys and padlocks. Lembit Opik and Shaun Ryder managed to get bitten by a snake.

Shaun came off worse; the snake bit into his hand and then started wrapping itself around his hand. They called in two people and managed to unwrap the snake;

Shaun was fine, there was a bit of blood and a couple of small cuts.

Sheryl Gascoigne first voted out of the jungle