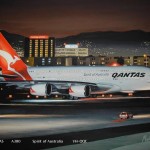 the near future after one appeared to break up in mid air flying from indonesia as passengers spotted falling debris. There were also huge chunks for the Airbus A380 found on the ground. The plane was forced to make an emergency landing and it has been confirmed that there are no injuries.

It is a tough decision by Qantas to ground the A380 and are currently seeking extra flights to book dissappointed passengers onto. Qantas are an airline with a totally unblemished safety record, although they have had a few isolated incidents, they are with Virgin Airlines having never had a fatal accident.

There are a number of airlines that have an Airbus A380 in service, however none of them plan on grounding the luxury model. It is still a relitively new airplane the A380 so it is not known if the incident was isolated or a build fault. If you plan to fly with qantas or any airline on the Airbus A380 then you should check to see how you might be affected. As I say currently there are no other airlines planning to ground flights, but this could change quickly ones the reason for the fault is found.