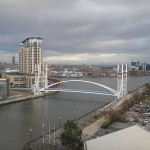 of salford and the explosion is said to have been heard from atleast 4 miles away. It is not fully know how many casualties there are however we do know fire brigades and police are on the scene.

Spokesman for the fire brigade had said he heard the explosion from 6 miles away. It is believed the salford explosion involved atleast 3 houses with a number of people trapped among the rubble. The explosion hapened in the early hours of the morning, due to this, it is expected that the number of trapped and injured could be on the high side as everyone may have been home.

We know for a fact there has been one adult woman so far, been pulled from the rubble by the fire brigade. For those who are local to the salford has explosion, we don’t quite know if local traffic will be affect. We imagine it will but to what extent is currently unclear. The gas board are on the scene right now trying to locate the source of the explosion and to ensure the area is safe from a secondary salford explosion.

Are you in the salford area? If so we want to hear from you, how far away are you and did you hear the gas explosion?