Does Kristen Stewart Count As a Celebrity?

Kristen Stewart, star of the eclipse saga that has been a massive hit across the world, has hit out at the world of media. 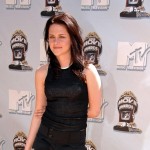 Her problem seems to have come from the amount of time that the media seem to put into her private life. Everyone knows that the media across the world will do anything for a good celebrity story however Kristen Stewart thinks they have the wrong type of person.

In an interview where she seen her self as a good enough of a celebrity to appear, Kristen Stewart said she doesn’t believe she is a real celebrity. Ontop of that, she is getting annoyed at the amount of attention she has been receiving from the press since her hugely successful blockbuster movies.

She is quoted as saying, she is only an actor and believes it is unfair to label her as a celebrity. I can see how she sees acting as a job because she does it day in day out. However, Kristen Stewart is close to being a household name, with most households owning atleast one copy of the twilight saga DVD. If thats not celebrity status, then I’m not sure I know what is.

I put this question out to my readers, does Kristen Stewart count as a celebirty? My answer is a big fat yes!