Carling Cup Round Up, Scores and Goals 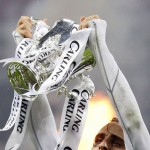 met Arsenal. The game got off to a quick start as a chance came to either side with Newcastle looking bright and upfor it but Arsenal and their fast slick movement looked to be the way through.

Before the break the carling cup game got its first goal when a corner from the right saw a side footed shot towards goal. This was cleared off the line with a header and nodded onto the back of Tim Crulls head to put Arsenal 1 up at the break which was rather cruel on Newcastle as they looked the better team briefly. After the break Arsenal got a huge stroke of luck as walcott raced clear after a clear foul further up the pitch, a cheeky lob put them 2 up. It was all Arsenal from then on, bendtner found a third after finding a little bit of space to lash home a fantastic shot from the corner of the box. A fourth was added by theo walcott in the 88th minute to more than seal the victory.

Other games in the carling cup saw West ham play stoke at upton park in which a fiery encounter saw stoke through to the next round of the carling cup. We also had premier league Aston Villa playing burnley at Villa park in which we seen a very drab and defensive encounter as villa rung the changes. The deadlock was only broken on 86 minutes when substitute emile heskey scored only for Clarke Carlisle to equalise only 2 minutes later. Extra time is currently being played